Xia is the founder and director of Temple of the Goddess, one of only a handful of federally-recognized Goddess/Pagan churches in the U.S., with headquarters located in Los Angeles, California. Xia is a ritual artist, mythologist, writer, minister, counselor, and healer. She has been creating, writing, and facilitating rituals for groups and individuals for 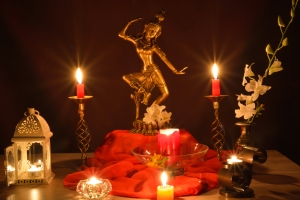 almost two decades, and has led thousands of men and women in transformational rituals. As a sacred dancer, she was featured in the “Trends” section in Newsweek as well as the Rites of Passage: Women’s Rituals segment on The Learning Channel. Xia is the subject of the video documentary Dance is Prayer, directed by Jules Hart. She has performed as a dancer in Los Angeles and Northern California in such venues as International Woman’s Day, Pagan Pride Day, Isis Oasis, and the Long Beach WomanSpirit Festival.

Xia’s work, as a literary artist, is to find new and innovative ways to present the feminine ideology to the public, focusing on unearthing women’s cross-cultural myths, often retelling them in a modern context. She has written them as plays, articles, short stories, poetry, and re-creating women’s ancient rites of passage. Among her many articles, an essay entitled Paganism: Out of the Closet and into the Fire, originally written for her son’s school in Pasadena for a “Diversity in Religion” series, has been reprinted countless times. Additionally, Rev. Xia has written numerous mythological and ritual works focused on archetypal studies of the Goddess including Rites of Passage: A Goddess Ritual for Women, which aired on The Learning Channel–showing Pagan rites for Maiden, Mother, and Crone which she also produced and facilitated. Additional articles include: Ritual and the Art of Alchemy, The Mythology of Nature, Sound: Evoking Spirit in Ritual Theatre,  Sacred Dance: A Moving Component of Ritual Theatre, and Secret Garden of the Feminine. She is currently completing her grimoire, Feminine Alchemy, a book of healing through Goddess archetypes, a multi-disciplinary book which bridges many genres, combining self-help, psychology, women’s issues/studies, anthropology, archaeology, history, religion, philosophy, and mythology.

Xia considers her two great accomplishments in life—to date—her son, Zachary, an artist, writer, and priest of the divine feminine; and Temple of the Goddess, a vision given her shortly after the birth of her son–to create a living temple, healing center, education and arts complex. After 10 years of legal work, crafting the language, and dancing with the IRS, Temple of the Goddess was given legal recognition by the U.S. Federal government and became a bona fide Pagan church in 2004. This huge feat she did with grace, dignity, and intelligence, responding to IRS questions such as “We understand you do ritual, but how do you worship?”–countless times. She met the never-ending barrage of questions from the IRS regarding Paganism by creating all-embracing religious principles, liturgy, and the Temple of the Goddess Handbook.

Xia’s next big goal is a six-part documentary series about the ancient face of the feminine which explores women’s history, culture, art, and heritage throughout the millennia, called

Forbidden Knowledge: A Glimpse Behind the Veil. She believes that in our modern world the mirror of womanhood is broadly painted with restrictive media stereotypes. However, the ancient stories and archetypes of the feminine, some going back eight thousand years, portray the feminine—women—as mothers, creators, judges, musicians, leaders, educators, artists, warriors, scientists, and healers. Art, culture, and religion are inextricably bound to the history of people. This ambitious documentary will unearth the wealth of feminine knowledge—lost to women and the world—hidden in the sands of antiquity. The tapestry of goddess-myth is richly woven with golden threads of rediscovered women’s art, history, cultural heritage, and folklore. Knowledge is power, and learning of these feminine myths will empower women through knowledge of their ancient roots.

As president of Temple of the Goddess’ board of directors, Xia continues to build and expand the mission and programs of the temple, one of which has been to offer public Sabbats for the Los An

geles community in Pasadena, California. For eleven years, Temple of the Goddess’ unique Sabbats were an offering of ritual theatre—built around the seasons and cycles of the Pagan calendar and combined mythology and art to re-connect, as well as strengthen our connection to the earth. These rituals were multi-media programs combining music, dance, liturgy, spoken word, visual art, and participatory theater. With her expert spiritual guidance and keen business sense, Xia brought together a remarkable group of people–singers, actors, dancers, story-tellers, musicians, puppeteers, ritualists, and those who are starving for ritual, to honor the Divine and celebrate the Wheel of the Year. As a Priestess, Xia works toward the day that the spiritual church will become a brick and mortar building, housing space for worship, art, healing, and learning. She is looking forward to the next evolution of Temple of the Goddess.

As a writer, mythologist, ritual artist, and independent scholar Xia has been researching and writing about the myths and archetypes of the divine feminine most of her adult life. For almost two decades Rev. Xia has walked the path of the divine feminine, committed to her role as an inter-faith ambassador for the Pagan Community. She continues to be a voice and an advocate for the Earth, the Goddess, the Temple, and the Pagan community.

David McVey's musings on food, music, and the world

The Art of Enchantment
Queen of Heaven

Goddesses of the Ancient World

Pantheon: a journal of spiritual art

Mantained by Life Force Arts Center, whose mission is to connect art with spirit

Adventures and Musings of an Arch Druidess

A community of Naturalistic & Humanistic Pagans

Shamanic Dreams of a Pagan Earth

Blog for FB's Pagans, Witches, Warlocks, Shamans and Sages. Listen to the songs and wisdom of the earth. Embrace the magic in all life. Find your place in the universe and your path.

Jamie Catto is a creative facilitator, mischief maker and trailblazer cutting through the bullshit to clear the way for authentic connection and inner understanding.

A blog about diving into the numinous.